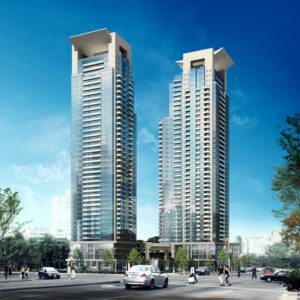 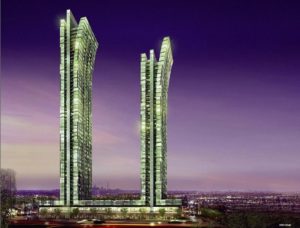 This pair of towers just south of Yonge and Sheppard will have eye-catching green façades rising above their podium. What makes the 42 and 33 storey condo towers stand out are their outwardly curved façades. Creating an architectural gateway for North York Centre on the street, the project will also have direct access to two subway lines at Sheppard–Yonge Station. 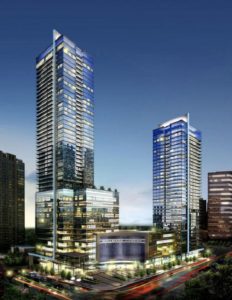 The Hullmark Centre is an understated yet sharp pair of towers on the northeast corner of Yonge and Sheppard. The complex also has retail and office space and addresses the intersection of Yonge and Sheppard with a broadly curved podium façade. Residents will have underground access to Sheppard-Yonge Station. 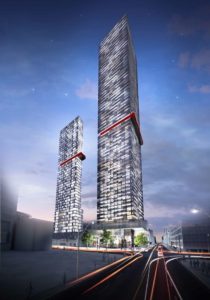 E Condos was designed by architect Rosario Varacalli and will face the northeast corner of Yonge and Eglinton with landscaped plaza. The landmark 58 and 38 storey towers will also feature two cantilevered pools projecting from the 58 storey building, surrounded by floor-to-ceiling windows and panoramic views of the skyline. Residents will have access to the subway and Eglinton Crosstown LRT line. 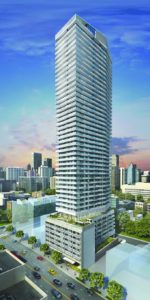 2221 Yonge is a polished tower on Yonge Street south of Eglinton now in sales designed by Pei Partnership Architects and Quadrangle Architects. The 56 storey tower has a unique pentagonal shape with cantilevered wraparound terraces. Its inspiration was Toronto’s many apartment buildings from the 1960s, but 2221 Yonge also moves residential architecture forward with its unique form. Residents will have direct access to Eglinton Station. 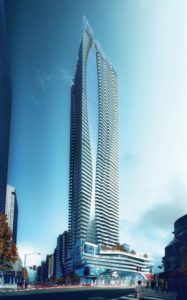 Great Gulf’s 75 storey tower now rising above its sculptural podium is set to further enliven the city’s main crossroads with new residents, retail and architecture. The architecture is unique with bold ripples, while interiors will be luxurious and distinct. One Bloor East is a rare condo to offer residents access to both lines 1 and 2 on the Toronto subway. It will be one of the city’s most prominent landmarks. 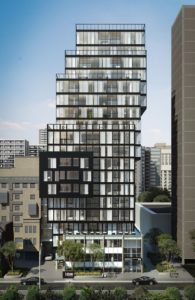 Totem Condos is nearing construction. Sales have been brisk. With a distinctive design, central location and great features, Worsley Urban Partners offers an excellent option for downtown living. The location is close to the Yonge Street strip, but on a leafy side street. The building will feature direct access to Wellesley Station. 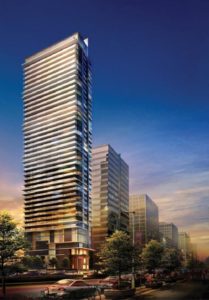 Renderings were recently released for this elegant and powerful tower combining office space with condos above. Professionals working downtown will appreciate the location on University Avenue near the city’s major institutions—the Financial District, hospital row, Queen’s Park and City Hall are all in close proximity. For those needing to travel further, the tower will have direct subway access to St. Patrick Station.